I just watched a video of the Christmas lights being turned on at the church of the Nativity in Bethlehem. It was a joyous scene. An enormous tree covered with thousands of baubles and lights in front of a multitude of happy, enthusiastic people. It was in sharp contrast to how it looked when we went there just 7 years ago. Then ,it was an empty, lonely place. We had lunch with the Mayor of Bethlehem and he told us how desperate he was, with no money for lights or Christmas festivities. He told us to spread the word that Bethlehem needed tourists. Our priest was actually quite pleased that there was no one else there but us. Even though there was some sort of rumpus and shooting he said it was marvellous not to have to queue....
Well I felt glad for the people of Bethlehem that they were once again full of tourists and pilgrims.
We only had a very small Nativity scene in England, it took 2 seconds to put up, we put all our efforts into decorating the tree. In Italy the Nativity scene (Presepio) is often more important than the tree . Some Nativity scenes are real works of Art, featuring log fires and water falls. In the local church they always enter a competition and the Nativity scene there is more like a model village.
Nativity scenes always make me think of Ian. We always put on a Nativity play at Primary school. One year he was chosen to be the Inn Keeper, he was very annoyed. He infamously said " They 'll say, Where's the Inn Keeper ? and the Inn keeper won't be there !!" 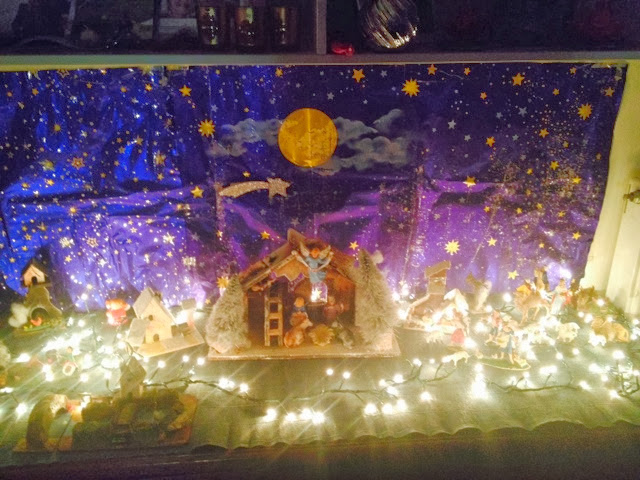