In Italy, for some reason, it is considered to be bad luck if a woman says "happy new year" to you. Some people say that a man must say it first, and so I make my husband wish me a happy new year,nice and early !

It is a traditon here, to wear red underwear on New year's eve.It brings good luck, and it certainly cheers you up.

This morning I was walking past a caffe and outside was a mannequin in red underwear, bearing the sign

Roughly translated this is;-


So, of course I had to go in for a cappuccino, I know the girls that work in there, and we had a giggle about the last line-which I haven't translated ...

New Year's Eve, or Hogmanay, in Scotland is the threshold between one year and the next. It's a time for a mixture of customs, for silent contemplation or noisy parties,for expressions of good luck,feasting and toasting and most of all for looking to the future with hope and confidence.

Here, in Italy, lentils and grapes are eaten as symbols of wealth. Chicken is not eaten, because chickens disperse the grain, while pork can be eaten, because the pig gathers his food towards him.

In Scotland, haggis is traditionally eaten  to celebrate Hogmanay. It is usually served with mashed potatoes and turnips. The word haggis probably comes from the French "hachis", meaning chopped. It's made of chopped offal, oatmeal and suet, boiled inside the bag of a lamb's stomach. It is always eaten to the accompaniment of the skirl of bagpipes and washed down with neat whisky.

Wassailing, is an ancient custom associated with the New Year. I don't think anyone does it anymore. It used to be that there was a wassailing procession. The wassail bowl was taken from house to house filled with spiced ale and apples. In England, it was the custom for people to get together in their homes and pass round the wassail bowl as they waited for the procession to call on them. Then, they would have some hot, spiced ale ready to pour into the visitors' bowl. 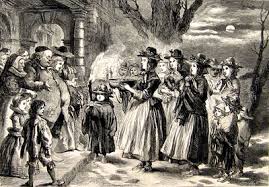 (Wassail song, from a traditional North of England song)


My Mum always liked the first person to cross the threshold, after midnight, to be a dark, handsome man. So, when she was staying with us in Italy, my husband would be the first person to come in our house. He would carry a piece of bread and some coal (they have pretend sweet coal here for the Befana to bring) and some salt. His reward would be a wee dram of whisky.

New Year's eve is often the excuse for the a big and boisterous party. Here, in Italy they love setting off fireworks. You start hearing lots of bangs towards the end of December and then at midnight on New year's eve there is a dazzling display, all over the place.

Then, everyone kisses each other and wishes everyone a happy new year.

We like to link hands and sing "Auld lang syne", in Britain.

Bonne anneè, Buon anno, Happy New Year, Srečna Nova Godina, An Nou Fericit,  to you all.
Posted by Angela at 13:06