One of the nicest things to hear is surely ' would you like to come round for a cup of tea? In Italy 'Vuoi venire da me per un caffè?

It means you are accepted and your company is enjoyed.  It's a step towards friendship.

'Make yourself at home' in Italy becomes 'Non fare complimenti.'

these simple sentences help us along the way to belonging and feeling part of a community. 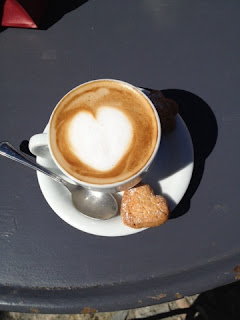 When I first came to Italy and was trying to get to grips with the language, mainly thanks to my motherin-law, some words caused me problems. One of these was 'furbo'. If you look it up in the dictionary you will find, 'clever, smart, cunning, crafty.'

If someone says with a smile, 'lui è furbo, or fare cosi è furbo, be careful. Furbo when used to mean clever or smart is more like something my dad would have said, 'Don't be a smart Alec' as a warning to my brother, or 'You think you're such a clever dick' to my poor mum which would have us in fits of laughter. Whatever, it is certainly not a complement. 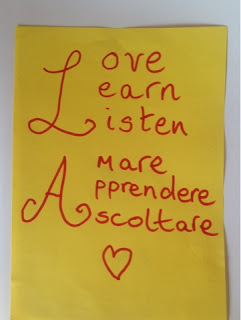 In the last forty years the amount of traffic on the roads has increased enormously.

My dad never took a driving test, he just went up to London, bought a car and drove it home. When the M1 motorway was opened in about 1959 he came home from work and told us to pile in the car, we picked up a neighbour and an auntie on the way and off we went down the M1 at a hundred miles an hour with my Auntie shrieking that the wheels were going to fall off and us rolling around and giggling in the back. Roads were different then.

Crossing the road however was taken very seriously. Policeman would often come to our school and teach us the Green Cross Code.

We were taught to chant it. It was the start of our survival guide to life. How to cross the road.

We were told about a man called Leslie Hore-Belisha (1893-1957) who had the bright idea- literally- of planting a black and white striped pole topped with a bright orange globe at places where it would be considered safe to cross the road. He had been the Minister of Transport and had this idea in 1934.

The Belisha beacons were melted down to make munitions in 1941 and then reappeared as poles with flashing lights.

The Belisha beacons were placed either side of the zebra crossings so motorists could see well in advance where people might be crossing the road.

The Primary school I went to was beside a very busy road and so crossing the road was considered a dangerous activity. We had a Lollipop lady who was someone's mum and she helped us safely across to the sweet shop on the other side.

When I came to Italy my ability to cross the road was severely tested. There are no Belisha beacons and cars can park jauntily across the zebra crossings, called Strisce Pedonali, or simply 'strisce'.

They don't even have to stop, and actually you can put someone's life in danger if you do stop because the car behind you might not be able to stop and so overtake you.

The Pedestrian crossing is really just a suggestion as a place to cross.

Remember to Look Left, then right then Left again because of course in Italy cars drive on the right.

In England you just have to stop and turn towards the Zebra crossing and cars screech to a halt, you want to bow and curtsey as you make your way across the road.

In England crossing the road has rules, in Italy it is an art.

Once outside Buckingham Palace with an Italian friend of mine, on a very cold Winter day with nobody around. We pressed the request button to cross the road. After awhile as there was not a car in sight we decided to cross the road even though it was still red. No sooner than we had arrived on the other side that there was a loud whooshy whizzy noise as loads of cars came speeding round the corner only to have to stop at the Pedestrian crossing and find nobody waiting,  so feeling embarrassed we crossed back again. 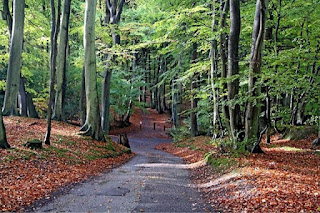 Take care on the roads wherever you are.