Worrying about the world

The world has become a very small place. There is so much to worry about. Bees becoming extinct so we won't have any food, glaciers melting by the minute leaving polar bears stranded on blocks of ice in the middle of the sea, islands of plastic the size of France floating about in the ocean, climate change, pollution, animals becoming extinct, toxic waste, toxic air, the end of the world's resources and today the Amazon is on fire, the world is on fire and people marching with banners reminding us there is no planet B. Mobile phones and 5G are harming our brains, taking away our ability to feel empathy and compassion.

Anyone who read 'Brave New World' by Aldous Huxley written in the 1930s a very frightening time indeed, might feel a shudder when thinking about the world. The title 'Brave New World' is from a line in The Tempest by William Shakespeare, which tells us that worrying about the world was nothing new.
'There is only one corner of the universe you can be certain of improving, and that's your own self.' Aldous Huxley.


Here's a little rhyme from my childhood that reminds us of the importance of drinking water,

If all the world were paper
And all the sea were ink,
If all the trees were bread and cheese
What would we have to drink? 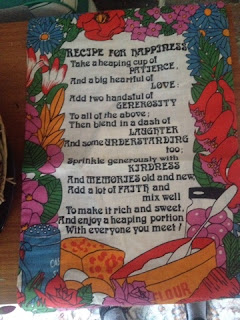