The magic of wisteria

One of my favourite memories of my first Italian spring was the abundant wisteria. From early March onwards it magically appears everywhere. Twiggy- like branches creep over walls and slide gracefully around lampposts, wend their way through the branches of the magnolia and evergreen trees, then at the click of  Mother Nature's  fingers they burst into full and frothy magnificent blooms. Technically wisteria might be considered a parasite, like ivy or  mistletoe. Recently my brother heard on "Gardener's question time' that ivy actually is good for trees, not to worry when it winds its clingy way round the bark of your beloved cherry tree, it is isn't doing any harm. The wisteria is named after someone called Gaspare Wistar (1761-1818), it's like his parents knew. In the language of flowers wisteria is associated with friendship and hospitality . Looking at my photos of all the wisteria brightening up the town I thought of how much they are like friends who can really help you feel better, give you a boost, bring out the best in you, just like the wisteria is doing here.

In Italian wisteria is known as glicine, and is often used to describe a colour of material. Look out for a pretty wisteria - coloured  top or scarf or even a cushion to bring the spring into your home. 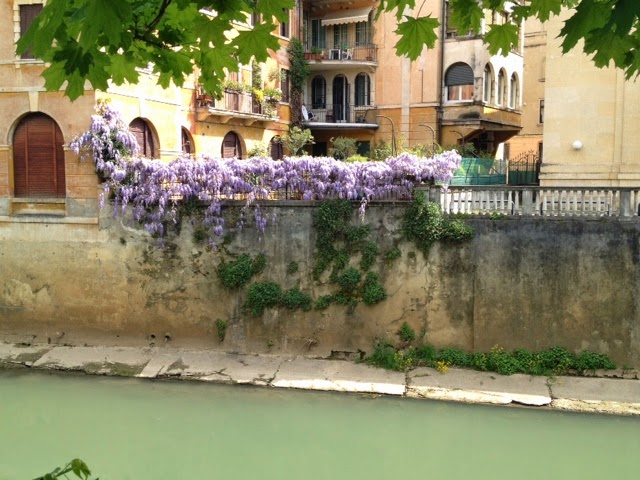 Email ThisBlogThis!Share to TwitterShare to FacebookShare to Pinterest
Labels: Flowers, The seasons