For over fifteen years my American friend and I would go to the English cinema on Mondays. We would both look forward to it all weekend. There was no Sky television and no DVDs where you could choose to watch in the original language. Neither of us had much contact with English- speaking people who actually lived in English- speaking countries on a regular basis and we both loved this chance to stay together, speak in English and watch a film. It didn't matter what the film was like, just the fact that it was in English was enough for us. Sometimes there were Italian subtitles and we would groan with disappointment because it distracted us from what was for us an intense experience. We would whisper animatedly to each other in the darkness of the cinema when we thought the translations were ridiculous or misinterpreted. All the way on our walk home we would discuss the films, the language and the difficulty of translating. It was a serious business for us, it was about who we were, our identity. We both needed to feel in touch with our native tongue.We both needed to feel we were keeping up with our language and what it meant to us.
Italians are experts at dubbing films.. All foreign films are faithfully dubbed, quite brilliantly so. Often I have difficulty in remembering if a film I saw was in English or Italian. It is big business. While watching a film dubbed in Italian that I know was originally in English, my brain is constantly translating the dialogue .It seems to want to know all the time what the English version would have been. Yesterday I watched an Italian film that was obviously in Italian and hadn't been dubbed. It took awhile for my brain to realise this. It was translating for a long time until it got the point that it was totally unnecessary. The film was called Tutta Colpa di Freud. with Claudia Gerini. It was the story of a  Psychiatrist father and his three daughters. I don't want to spoil it for those who haven't seen the film. You know I'm good at that, ever since I told my brother the ending of The Sting. Just a couple of things that won't ruin the surprise. The father gave the daughters a lesson in what he considered to be the four categories of men. He said that 95% of men fall into one of four categories.
1 Gli insoddisfatti, the dissatisfied ones
2 The Peter Pans, trapped in eternal adolescence
3  I vorrei ma non posso, the ones who would like to but can't, they are married with children
4 Buoni, belli e intelligenti, good, handsome and clever, the only problem is they are mummy's boys

One of the daughters then asked about the remaining 5%. The father replied that they were the decent ones
Well I don't know about you but I think he was a bit harsh on his own sex.

The other quote that made me think ,was by Claudia Gerini who played the part of the betrayed wife.
She said that what hurt most about betrayal was the humiliation.
I also like a piece of advice that the father gave one of the daughters as she went on a date for the first time. He said Qualche volta I maschi confondano l'entusiasmo con la leggerezza. Sometimes men confuse enthusiasm with superficiality.
How true how true
They do they do. 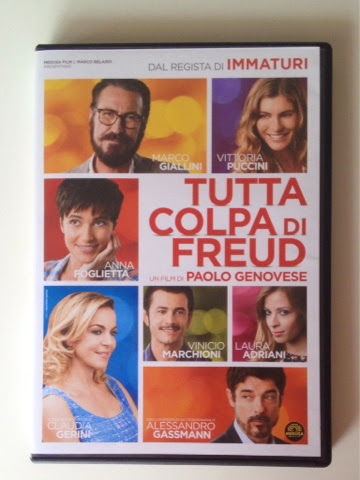