Gasping for a drink

On hot Summer days sooner or later everyone knows what it feels like to be really thirsty. In English when we are desperate for a drink, we say we are gasping. Like a fish with its mouth hanging open. When at last we get a glass of water it gives the most blissful feeling of relief and pleasure. This feeling is so intense that people have written whole books and stories about it. Philippe Delerm's book La prima Sorsata di Birra, e altri piccoli piacere della vita has two pages to describe  the pleasure of the first sip of beer .He says the first sip is the only one that matters, that the pleasure starts in the anticipation even before that first sip. After that the other sips pale into insignificance apart from maybe in a smaller measure the last one. Laurie Lee (1914 - 1997) whose book Cider with Rosie,  I enjoyed reading so much at school that I then went on to read all his other books also wrote about being really thirsty. In Laurie Lee's book of short essays, I can't stay long, he describes the exquisite pleasure of being thirsty and at last having a drink. He says it is worth being really thirsty just to experience that sensation.

My own personal memory of an overwhelming thirst happened on a cliff top walk in Swanage  in Dorset on the south coast of England. 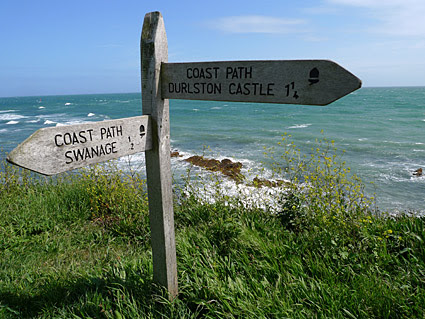 I was about nine or ten. The beauty of the cliffs, Old Harry and the blue twinkling sea were the scenery of this walk. My mum and I planned to walk up to the top of the hill opposite our campsite and then walk along the top and down onto the beach and along the sea front of Swanage. We woke up to a cold grey day and so packed a thermos of hot chocolate and some cheese sandwiches. My mum could have conquered the world with a thermos flask. That was all she needed and the world was her oyster. This day however it was a challenge. No sooner had we got to the top of the cliff than the sun came out. We walked along admiring the view, enjoying the sunshine. It wasn't long before we started to feel very hot and thirsty. There was no point in turning back it was just as far as going on. My mum had a wicked sense of humour and soon she was giggling away at us up there with our tongues hanging out. Hot chocolate does not quench your thirst at all. Cheese sandwiches make you even more thirsty. We struggled on, panting and tired until at last we started on our downward descent. What a glorious sight before us, the beautiful  bay and the beach and tucked in the corner a little bungalow with an ice cream sign swaying gently in the Summer breeze.I have never felt less like eating an ice cream. When you are really thirsty only water will do, We were so thirsty and dehydrated that we had to ask for a glass of water from the tap. There was no bottled water in England then. That first sip really was incredibly wonderful. Laurie Lee was right, it is worth being thirsty just to experience that feeling of pleasure and relief. Once is enough though. I haven't forgotten the pleasure of that glass of water but I haven't forgotten the feeling of being desperately thirsty either.
Posted by Angela at 18:14