Score a goal with Gazpacho

Today I asked a young Italian boy if he was looking forward to the match on Saturday. I told him the England team think Andrea Pirlo is the one to watch. He said he thinks Brazil and Spain will be the stars of the show. Spain has certainly won quite a lot of important competitions in recent years and the Final  of the cup winners cup between Real Madrid and Atletico Real even kept me on the edge of my seat. So we're expecting great stuff and lots of fancy footwork from the Spanish players.

When I got home I decided to make Gazpacho in honour of Spain and also because it is an ideal hot weather recipe and my husband likes it.

Moisten the bread by covering it with water and adding the vinegar then leave to one side.
Put the prepared cucumber,pepper , onion, garlic, tomatoes, olive oil, salt and pepper into a liquidizer and blend together. Lightly squeeze the bread then add to the  puree and blend briefly.  Check seasonings. 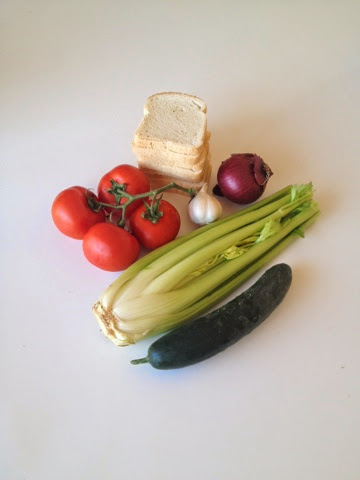 Cover and put in the fridge until really cold.
Serve in bowls and  top with croutons, diced cucumber , sliced tomatoes and hard boiled eggs if liked.