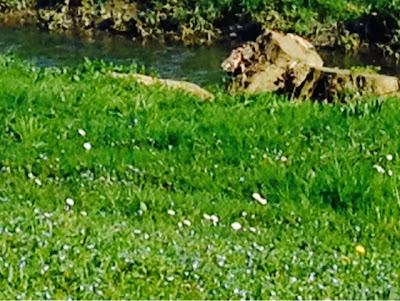 My husband knows how much I miss the countryside where I grew up. It was part of my daily life .It was around me all the time. Here in the town you have to look a bit harder but it 's there for anyone that wants to see or feel that same delight and joy in Nature.It 's there when you wake up in the morning and hear the birds singing.It's there in the sunsets that sweep the sky in the evening. It doesn't take much to stir the heart.Just a burst of bird song, a few short notes, a parch of daisies , a clump of moss.

The other we went to a nearby shopping centre. He doesn't like shopping like most men, but if I ask nicely he'll come with me for a coffee then sit and read his paper while I whizz round with the trolley . As we were packing the boot he said " it isn't exactly The English countryside,but there is a very pretty stream over there. Well I went to look and sure enough the stream by the side of the car park was frantically calling out that there was beauty right there. 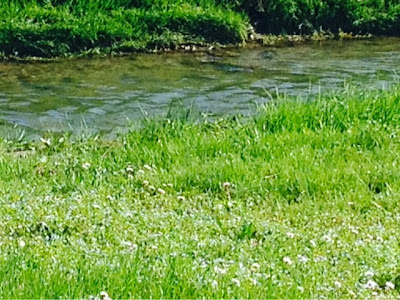 You would never know that was by a busy shopping centre .The water was clear and sparkling, the banks covered with occhi della madonna.

At the Art exhibition the other day the guide mentioned Walt Whitman and said how is poetry conjures up the same sort of images as the paintings, at least I think that's what he meant, I was a bit hungry by then.
Here's a poem by Walt Whitman that to me seems appropriate

I believe that a leaf of grass is no less than the journey- work of the stars
And the pismire is equally perfect , and a grain of sand,
And the egg of the wren.
And the tree- toad is a chef d'oeuvre for the highest,
And the running blackberry would adorn the parlours of heaven,
And the narrowest hinge in my hand puts to scorn all machinery,
And the cow crunching with depressed head surpasses any statue,
And a mouse is miracle enough to stagger sextillions of infidels. 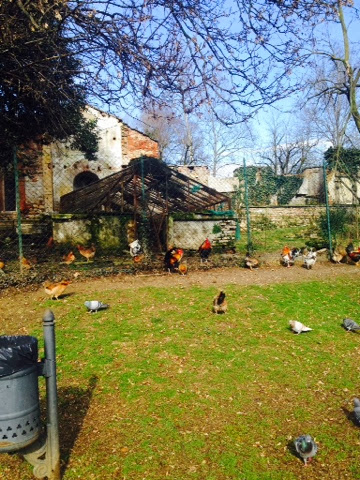