On Market day Ekaterina always liked to take Mme. Monique through the tiny back streets of the small Mediterranean town and stop at the Patisserie on the corner of the square.
She would buy them both a small chocolate éclair to have in the afternoon. Ekaterina loved the way the eclairs were placed carefully in a beautiful box and then wrapped with ribbon. It made it such a special occasion when she opened it at home with Mme. Monique, looking on in eager anticipation of their treat .She liked to pretend it was a gift from an admirer.
Then she would make them both a drink .She would hold the cup to the old lady's lips and then gently wipe them. Then give her the eclair  in bite sized pieces. Mme.Monique's eyes would light up as she savoured the creamy texture and a mischievous glint would appear in her eye. The two women were united in the sharing of this pleasure.


As Ekaterina pushed the wheelchair round the edge of the Bar Marchè she would look at the tourists and try to imagine what their lives were like.
It was an unspoken rule that the bar was left to the tourists on market day, except maybe the kind old man who run the Couscous cafè.
The tables needed to be free for all the people who had came to the market and wanted to try the Plat Du Jour. On the little blackboard it said today's special was Omelette à l'Italienne.
There was such a festive air, with the accordion player and the families all in their colourful clothes. Ekaterina thought how much she was looking forward to going home in August, not long now.
Each year, for one month, the small town where she had grown up came alive again. Weddings were celebrated, families reunited, young people chattering in the language of their parents, dancing and singing in the streets and the smell of roasting meat all the time as homecomings were organized.
When the wall had come down she hadn't for one moment thought of how different her life would be. How all her friends and relatives would be scattered across the globe .Her son was already married and had a baby. Her husband spent more and more time at home since his accident at work.
It hadn't taken long to see that it was up to Ekaterina to secure a future for her grandson. She didn't like to think too much about that time.
The memories that she treasured belonged to a period of her life before the wall came down.
Every Summer Ekaterina would go with her mother to stay with her grandparents in the country. Ekaterina could still taste the plump juicy tomatoes, peaches and apricots. In the evenings her grandmother would run a bath for Ekaterina and then wrap her up in a soft towel and place her in the huge armchair in the corner of  Deda her grandfather's study. While her Baba took a soft brush and carefully dried Ekaterina's hair, singing softly, she would read all the books she could from the shelves on the wall. Her favourites were the Sherlock Holmes stories. She imagined him to be handsome and strong, protective and on the side of the good. She longed to meet a man like that.
Ekaterina's mother would protest that she was too young for such stories, that she would be too afraid to sleep. But she wasn't at all, she would dream of being looked after by a strong kind man and her dreams were always peaceful.
It was easy and cheap to travel by train then and often with her sisters and cousins, her mother and her aunts, they would set off with bags full of bread, cheese, and cakes, peaches and tomatoes, and journey as far as they could, sometimes for days. She felt as though she must have seen the whole world.

Ekaterina's husband wasn't so adventurous. He was happy to sit in the bars with the other men after work , smoking and playing cards. Their son grew up strong and handsome, just like she had imagined Sherlock Holmes.
Ekaterina's  grandson was only three months old when the wall came down.
To give her family a future she knew she had to go away and earn money.
It was always the same story. An elderly or invalid relative who needed constant care. No-one had time, they were all busy working or lived too far away. They needed someone there all the time, to do everything.
Most of the families had been kind to her.
Mme. Monique had been given three months to live when Ekaterina had started to look after her. That was six years ago. The old lady's son and daughter were delighted with Ekaterina.They felt a bit guilty that they hadn't  worked this miracle themselves.
Sunday was Ekaterina's day off and then she would come to the Bar Marchè with her friends. They would put on their best clothes and order tea, hot and black and sweet. They would talk excitedly in their own language ,admiring each others clothes, discussing their plans to go home and catching up on each others news.
This Sunday she would tell them that she had got her ticket and had bought all her presents to take home. None of them ever talked about how different their lives could have been. 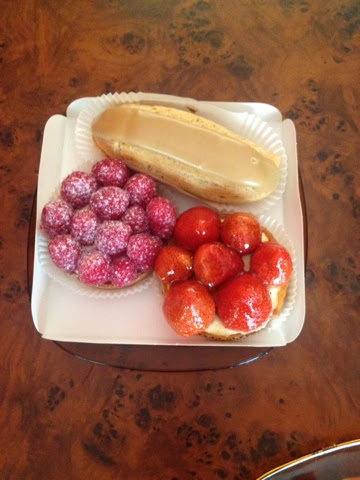