Pussy willow, catkins and the magical world of the woods 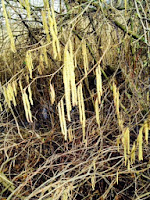 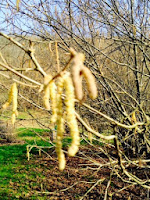 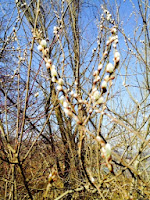 Mother nature has been sprinkling the countryside with gold and silver to distract us while she prepares the final touches for her dazzling, bounteous display of blossom.

﻿﻿
﻿
Catkins and Pussy willow were magical for me. They were the first buds to be noticed at the end of the winter. We would pick bunches of them to take home and I would gently stroke them and imagine how the little fairy folk would use them. The catkins or lambs tails were golden silk gowns for the fairies. The Pussy willow could be used to make silver velvet cloaks for the elves and pixies. The moss was the carpet of their ballroom. Whenever fairy rings appeared on our lawn, my mum would tell us that was where the little folk and been dancing all night. We believed her. She told us stories about the glow-worms that helped the woodland creatures find there way home. We would wander through the woods looking out for the doors to their houses on the tree trunks, sometimes knocking and hoping a fairy would answer. Of course they would only be seen at midnight with a full moon, when no-one was around. they kept the countryside safe, looked after the little animals and birds and had magic wands and wings. They were friends of all the little owls, rabbits and woodland creatures. They belonged to a vast, magical, happy parallel universe.

None of this really survived the journey to Italy, apart from the fact that I had grown up, sort of ... The woods of Northern Europe fire the imagination in a different way to the bright sunshine of Italy.
The first time that springtime came around I asked how to say Catkins and Pussy willow in Italian, I was met with blank looks. I looked "catkins" up in the dictionary. All I could find was (Bot) amento, gattino.

Yesterday, however, my little granddaughter told me that the teacher was telling them a long story. A little bit every day. It was about a little barbagianni  who was afraid of the dark. I looked into her dear, earnest little face as she told me the story, I felt my little folk stirring, unfurling their wings and opening their eyes.
Now that is a word that I really like in Italian, barbagianni. In English it is Barn Owl.
Barbagianni literally means Bearded little John.