Voices on the Wind, Frances

As she turned the corner onto the beach, Frances felt the full force of the wind.
She loved the feeling of the wind wrapping itself around her and finding its way under her collar. Her curly hair bounced and danced  with the rhythm of the wind and the waves. She scanned the beach to see if there was any sign of her daughter-in-law Susie but there was just a couple of dog walkers and a few joggers.
Frances moved to a sheltered spot near the dunes where she could keep an eye out for Susie. She laid out her picnic rug and took out her thermos flask of tea and tin of home-made biscuits. Frances loved living by the sea. Even after all these years she still got a thrill out of saying to herself, I'll go to the sea and be home for tea.'

She'd come here as a young G:I bride. Her husband Bill  had told her that he wanted to marry her from the moment he set eyes on her. Even now every morning he told her it was the best thing he had ever done.
Their son Martin used to roll his eyes when his dad said this but since his own daughter Beth was born, three years ago, he had become a devoted father and husband.
Frances had sensed though that something was wrong. Susie didn't seem happy and last week Frances was sure she had seen her with another dad from Beth's nursery school in a coffee bar, just the two of them, sitting a bit too close.

Frances turned her face towards the ocean, breathing in the salty, invigorating air. She thought she heard her mother's voice then,
'It's alright Frances, everything is alright.'

When Frances and her brother were woken in the night by her father's screams and shouting, their mother would come to them and put her arms around them,
'It's alright, everything is alright.' They would go back to sleep reassured by her calm tones.
When the nightmares got worse and her father spent more and more time in the pub, their mother would make them hot sweet tea and tell them stories of how she had met their father and the wonderful times they had had before the war. She talked about picnics in bluebell woods, day trips to the sea, paddling in streams and stolen kisses on moonlit evenings.

Frances's father had been a talented artist and there were some lovely paintings hanging in the bedroom, their mother laughing or sitting at a desk writing love letters, strolling through beautiful bluebell woods.
Most evenings they would be interrupted by their father crashing into the room and stumbling up the stairs. Their mother would smile at them and tell them to hurry off to bed and she'd come and tuck them in.

Things got a bit hazy when Frances was about ten and her father was sent to a place to get better. Frances's mother took her and her brother aside and told them that their father was a wonderful man, he loved them very much but he had a sensitive soul and the trenches had taken something precious from him. For her though he would always be  her handsome true love. Frances never saw her father again.
At night her father's screaming was replaced by her mother's weeping.
When the war started in 1939,  Frances's brother became a pilot. Frances worked at the factory making ammunition. When the G.I s arrived they held dances and she met  Bill. He came round to their house and brought chocolates for her mother and asked if he could take Frances to the cinema.

He was with her when the telegram arrived to say that France's brother was missing in action. Bill made strong tea  and held her until her sobs subsided.
Not long after that Bill asked her to marry him. He told her that her mother could come too. His parents would make her welcome and  she'd soon make friends in their little New England community. He told her all about his home on the beautiful Atlantic coastline and his plans to carry on his father's car maintenance business  after the war. He'd always loved working on cars, he had a real passion for them, doing them up and taking them apart. His eyes still shone when he talked about cars.

Frances spotted Susie in the distance, wearing a bright pink jacket, her dark hair tied in a pony tail. She waved to her and Susie ran towards her.
She  jumped up and down, apologizing for being late and rubbing her hands to keep them warm.

Frances moved to make room for Susie on the rug and poured out two cups of tea from the thermos.
Susie bent towards her mother-in-law and asked her what she wanted to talk about.

Frances blew on her tea and put her hands round the cup to warm them. Now she was sitting next to Susie she didn't know what to say. Perhaps she was being too apprehensive. Maybe Susie would be offended. She tried to find the right words to be reassuring but also warn Susie about the dangers of  giving the wrong impression.
She smiled at Susie and told her how much she loved coming to the beach on a sunny day even in Winter. She told her how this had Always been her special place. She used to bring her mother here and have picnics with Martin. They would look out to sea and tell him   that across the sea was England, their home. Once he put a bottle in the sea with a note. Francis said how welcome they had been made by Martin's family. It had made up for their longing for home. She said how important family was to cushion life's blows.  Francis knew all about trauma and how much a loving family could heal pain.
Susie listened in silence, gazing out at the ocean, feeling her breathing rise and fall with the waves.
She told  Francis how much Martin loved his grandmother and what a gentle influence she had had on him.
Francis looked pleased. She spoke softly as though she was talking to the waves that were rushing across the sand. She said how she could hear her mother's voice on the wind, calling gently that everything would be alright.

Susie sipped her tea. It seemed as though Francis was trying to tell her something. Her mother-in-law was quite reserved and not one for speeches like this.  She still kept up her British traditions and used such quaint expressions .When Susie met Martin she was completely besotted by his quiet thoughtful ways and his discretion and sensitivity . Underneath he had a strength and resilience that made her feel safe and protected. She fell head- over- heels in love with him and had never looked at another man since.
Susie reddened as she thought of Frank, Hetty's dad. He was going through a nasty divorce and they had got in the habit of having coffee together while the girls were at nursery. Frank was angry and hurt and she thought she could help, but maybe he was getting the wrong idea. She was becoming far too involved in his problems. Francis's words seemed like a warning. Susie became aware that her mother-in-law was talking again.
She was offering Susie a biscuit from her tin with a photo of King George VI. Francis warned her that the biscuits were very spicy because she had put in too much ginger.

Just then a couple of joggers ran past kicking up the sand. They shouted out an apology and waved cheerfully. They looked so young and happy that Frances and Susie smiled back at them.
Francis pulled up the hood on her jacket and looked straight at Susie.
She put her hand gently on Susie's arm and  a small smile played on her lips as she described a happy marriage as being one of life's blessings but not many realize it until it's too late. She said how happy Martin was with his lovely family and how fragile families really are.
She talked about her own mother and how she never stopped seeing the young handsome man that she had fallen in love with, even  though the hardships of life had snatched away their chances of happiness.

Susie was getting anxious, had Frances guessed something. She thought about Martin and how hurt he'd be if he thought for one moment that she'd betray him. She took another biscuit, the ginger made a nice contrast with the sweetness.

Francis watched Susie eat the biscuit and casually remarked that marriage is like a gingernut biscuit, you need the spice as well as the sweetnessi. She then giggled mischievously.
It was such an unexpected sound from her rather serious mother-in-law that Susie couldn't help giggling too and then they were both laughing , revelling in the feel of the wind and the sound of the sea, the waves crashing and the Winter sun warming their faces. They looked at each other, two women, joined by a sort of atavistic female solidarity, enjoying being together, sharing the secrets of the heart that are passed on generation after generation.

The sound of their laughter rose up and mingled with another voice on the wind from the ocean, 'It's alright Frances, everything is going to be alright.' 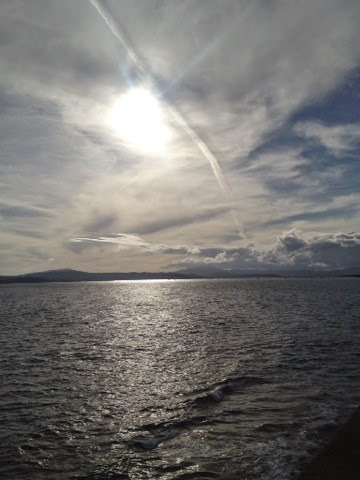