Last month we went to stay with friends in Yorkshire.
My visions of Yorkshire always seemed to be a cross between Postman Pat and Wuthering Heights.
I knew about the War of the Roses and that it's the biggest county in England and I knew my friends deeply loved their home county. I also knew that they had taken some friends on a David Hockney Tour of Yorkshire to see the landmarks made famous in his paintings. I knew they loved going to Scarborough to see plays by Alan Aykeborne, to Harrogate, to Ripon where Lewis Carroll sat in a church where rabbits were carved into the pews and found his inspiration for 'Alice in Wonderland'.
I was totally unprepared for the incredible beauty of this amazing county, for the sights that nature has gifted to the area, for the interesting and fascinating history that is all around. You are treading in the footsteps of kings, of warriors, of Vikings, Romans of great industrialists, of miners. Stories from long ago are whispered on the wind. the past, present and future are beside you all the time.

My friend had often told me of the wonderful traditions she upholds, Christmas shopping in Whitby, train rides over the moors on New Year's Day, coffee and cakes in Betty's teashop, walking along the Cleveland way, day trips to the sea, to the dales, to Castle Howard. Such were the powers of her description that part of me felt as though I'd already been there and joined in all the fun. She had been a District Nurse in the dales and in the industrial towns. She had experienced life through the eyes of Yorkshire farmers and of people on the margins of society. She has loved and cared for them all.

When my friend asked what we'd like to see in Yorkshire I asked her if we could go on the steam train that she had talked about so much and could we go to the sea. I love going to the sea, it's always magical for me. Little did I know that this journey was going to be one of the most magical of all.

We drove over the moors to the little village station. We were told that we had just missed the purple heather, that it was a spectacle to behold in August and September, but the moors looked powerful and majestic all the same.

At the little station we seemed to enter a parallel world. The station was like the one used in Harry Potter, the Hogwart's express could have arrived any minute. the waiting room and the little shop seemed  unchanged since Stephenson had invented his steam engine. grown men became boy's again as they posed in front of the engines.

We set off on the train and stopped almost immediately on a little bridge. I looked down into a beautiful, sparkling stream and saw a salmon leap. Could it be so? I thought they only did that in Ireland and Scotland. Our friends told us that we were looking at the River Esk,  I put that in a part of my brain for crossword puzzles that ask for a river with three letters. They said that indeed salmon do leap about in the River Esk, so do trout and Freshwater pearl mussels.

Believe me, going along by train in the valley of the River Esk is like entering a magical kingdom. You almost expect to see fairies and elves popping up.

The River Esk rises at the Esklets on Westerdale Moor in the North Yorkshire Moors and flows through Westerdale. It  flows through a narrow steep sided valley with the intriguing name of Crunkly Glyhll and then runs east through the valley Eskdale and into the North Sea at Whitby.  Not even Tolkien could find nicer names than these. 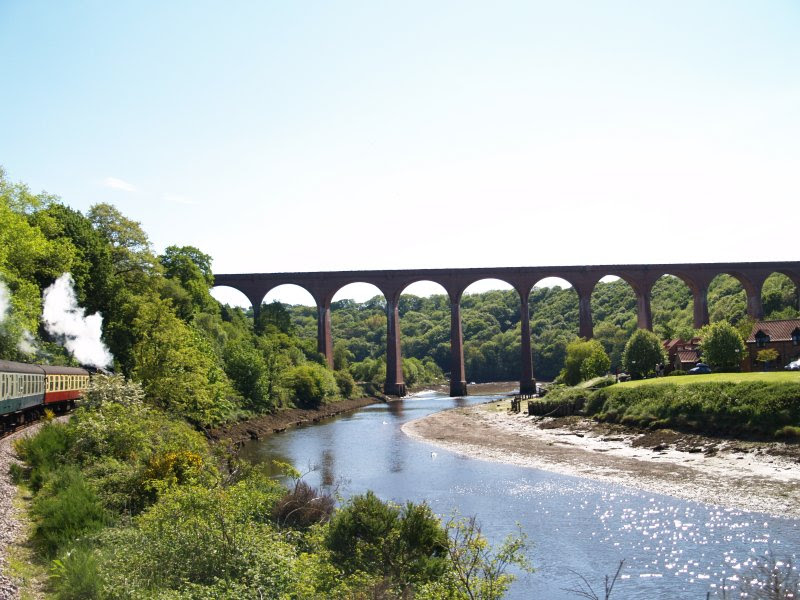 You can have coffee and tea on the train, and look out of the window and breathe in the charm and fascination of the places you pass. Some of the place names have unexpected pronunciation, Ruswarp is Russop, and Sleights rhymes with heights.

All the time you are aware of how people appreciate and enjoy this beautiful county, young people in canoes, older people walking along the footpath that runs parallel to the railway line, the families in the train glued to the window, the volunteers that collect the tickets just for the sheer pleasure of admiring their home county. All this and we haven't even got to Whitby yet.