Getting to know me

I was tagged in this fun blogger tagging thing by the wonderful Vallypee. You can read her post here.

Apparently I need to answer these questions with some random facts about me. Anyway, I have to answer the same questions as Val, and I'll tag four more bloggers at the end, so they can do a post with their answers, too. It sounds fun, so thanks Val!! 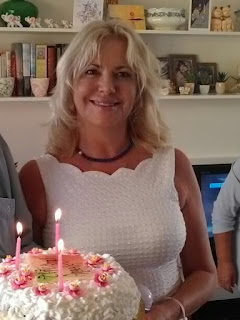 Who are you named after?
Well my mum wanted to call me Jaqueline, after her beloved old bicycle, but while she and I were still in the nursing home my dad rushed off to the Registry Office and had me named as Angela after one of his old girlfriends. To make up for it he added on my grandmother's name and lastly Geraldine, an anagram of my mother's brother's name who was killed in the war. So I ended up with a long name which was handy for the playground game 'letters in your name.'
Do you like your handwriting?
I don't know if I actually like my handwriting, but I really love writing with a pen, I love that feeling of sort of caressing the letters as they appear on the page.

What’s your favorite lunch meat?
Freshly sliced Parma ham is a lunch time treat all year round, whether with melon, figs or mozzarella and tomato. My very favourite meal though is Roast beef and Yorkshire pudding.

Longest relationship
My husband and I are looking forward to celebrating our fortieth wedding anniversary this year. I met him when I was seventeen and he was twenty one. An age when hormones play games and so he became my one and only.

Do you still have your tonsils?
Yes I do, but when I was eight it was quite something to have your tonsils taken out and have ice cream. So when I got bad tonsilitis I was sure I was on the way to having ice cream but the doctor gave me some pink medicine, told me to stay at home for three weeks and that was that.

Would you bungee jump?
I'd love to be able to say yes to this question but I know I'd hate it. Once I saw a programme that said ten per cent of people have that daredevil gene. The most daring thing I've done like that was at a three D cinema where it seems like you are doing the daring stuff but you're really sitting in the seat all the time.

Do you untie your shoes when you take them off?
The only shoes with laces that I wear are Trainers and I usually untie them unless I'm trying to be trendy and tuck them in, then I have to use a shoehorn to take them off.

Favorite ice-cream?
My favourite at the  moment is Salted Caramel, but I also love Stracciatella, chocolate chip, almonds, anything with nuts and chocolate, oh dear I sound a bit of a greedy guts don't I?

What’s the first thing you notice about people?
I'm rather short-sighted so the first thing that attracts me is the way someone moves and then as I get closer the expression on their face.

Football or baseball?
When England hosted the 1966 World Cup my brother and I developed a passion for football which has stayed with me.We learned all the names of the players, even their wives, they were called World Cup Widows then, not WAGS. We even had a stamp with England Winners printed on it, it was all very exciting. Later on, watching my son play football I appreciated even more the value of the game, all you need is a ball and a rule book. It seemed to be a great way for children to learn to win and lose and feel part of a team. I don't know much about Baseball but I know the Patriots won this season.

What color pants are you wearing?
As Val says, if you mean trousers, I also like jeans or black trousers to smarten me up. Underpants i try to keep as attractive as possible because my mum used to tell me I could be rescued by a fireman at any time.

Last thing you ate?
Pasta with tomato sauce, ham and salad, a favourite quick lunch that appeals to all ages.

If you were a crayon what color would you be?
Bright pink or turquoise blue.

Favorite smell?
In the morning I love the smell of fresh coffee coming from the cafès as I walk round the town, bacon after a long walk, then I love smell of chocolate cake while it's baking, and the smell of roses all the time.

Who was the last person you spoke to on the phone?
My brother. He is against all forms of modern technology and still thinks the best invention ever was Alexander Graham Bell's. There's nothing like the sound of a loved ones voice over the landline. He rings me from his office once or twice a week and we can happily spend two hours chatting and laughing.

Hair color?
Naturally it's brown but I really like it blond.

Eye color?
If people want to be kind they say they are green but they look sort of muddy to me.

Favorite food to eat?
Oh dear I could sound a bit greedy again, I love roasts when in the UK, pasta and pizza in Italy, Omelettes in France.

Scary movies or happy endings?
Happy Endings usually, but sometimes the adrenalin of a scary movie is exciting.

Last movie you watched?
A United Kingdom, about the king of Bechuanaland, now Botswana, who fell in love with an English woman. It was a lovely film and everyone in the cinema enjoyed it, it was a real lesson in how love conquers all.

Favorite holiday?
I love to be beside the sea, whether it is the South coast of England, the South of France, or beautiful Sardinia where the sea is turquoise and like a swimming pool.
Beer or wine?
Beer with pizza, wine with everything else.

Night owl or early bird?
Early bird during the week, Night Owl on a Saturday night.

Favorite day of the week?
I love Friday, all the promise of the weekend ahead. Friday is yellow, for me, the days of the week have colours. Monday, green, Tuesday pink, Wednesday brown, Thursday dark brown, Friday yellow, Saturday white and Sunday silver grey. I recently learned this is called synesthesia and is quite common.

Three or (four) favorite bloggers you want to learn more about?
The wonderful, witty and musical Derval Mc Cloat
Jane Risdon with her interesting and informative blog about jollies.
Donnalane Nelson, who seems so brave and kind
May I add Little Lou Designs

Who were the last three people to follow your blog?
Val Poore, Derval, and my faithful friends Louise and Dawn.